Don’t ask me why… let’s just start with that. 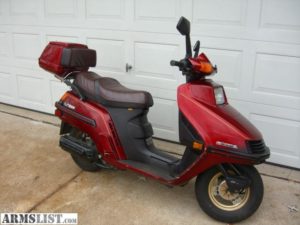 This was one of those moments, where watching too many youtube videos about scooter customization.

I tested several different tank ideas (including modding a vintage fire extinguisher but thought about the legal problems, trying to licence a modified gas tank… so I swapped the tank from the Helix along with the suspension and other pieces and removed all of the plastic to expose the frame.

FABRICATION : FOAM AND PLASTICINE
I started the build with high-density styrofoam bought from HD and just laminated the sheets together to get the width I needed! Once I had the shape roughed out I hit the local art stores for plasticine…. lots and lots of plasticine! Using the plasticine I smoothed out the shape and essentially designed everything at this stage. It needed to have access to a modified electric panel in the front and it needed access to the fuel tank and battery, so it needed to be built in sections and fitted. 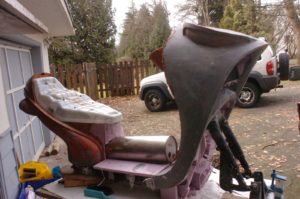 This picture shows the progress after the first summer and heading into the fall. The shape is coming along, but the tank placement was still up in the air. At this stage, I decided it was necessary to keep the Helix tank and shroud it instead of having an exposed custom tank… I could always go back.

There were several complicated steps that all needed to be completed before I would have a finished piece.
First, the sides have to match, right and left have to be mirror images of each other… no easy task, but many templates and measurements later, I was satisfied with the accuracy of my measures.
The second was… you have to make two casts to get the positive piece you need. You cast the negative from the mold and then you cast from the negative to get the final piece… that’s a lot of fiberglass and resin.
My fiberglass source was a swimming pool manufacturer in Vancouver. 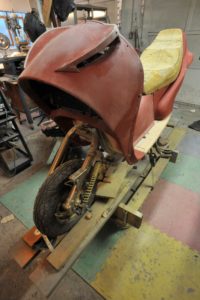 This picture shows the progress after the first summer and heading into the fall. The shape is coming along, but the tank placement was still up in the air. At this stage, I decided it was necessary to keep the Helix tank and shroud it instead of having an exposed custom tank… I could always go back.
The original idea was to build a steampunk themed scooter, so I had decided to not use any chrome and chose to used wood for the running boards.
Replacing the chrome was the next big hurdle. MORE CASTING!

CAST IN BRASS
I chose to fabricate all of my highlight pieces in cast brass. The problem with that is that I couldn’t finish the body of the bike until the pieces were cast. Each of the pieces I created would shrink a little in the casting process, so I had to wait until the pieces were cast, before finishing the bodywork… exhausted yet? This image is from late winter from year one of the fabrication. 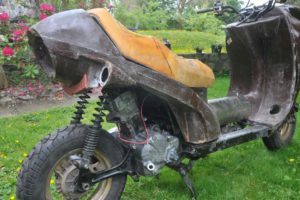 The first casting and test assembly on the beefed-up frame. The tail section is separate from the front sections. I was still toying with the gas tank at this stage, which is why the middle shroud hasn’t been cast yet. A brown dye was added to the resin, later pictures should explain why.

Getting into the summer of the first year and the brass pieces are back, raising another casting problem… LENSES! What monster have I created for myself! 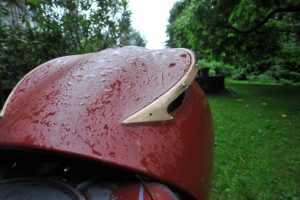 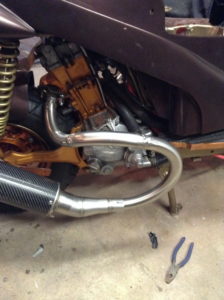 I went with an exhaust from a CR250 and played with the shape of the exhaust pipe. Because of the location of the exhaust port and hanger position for the muffler, I had to come up with a rather shapely exhaust down tube.

DONE, BUT NOT DONE
The Helyx took me almost three years to get it to this stage.
I’ve decided to upgrade the gauges to digital and to swap the engine once again, for a 3000W electric motor.
I am also looking at disc brakes for the front and changing out the handlebar controls for more modern convenience.

A labour of love, a misguided passion or a continuing project still sitting in the corner of the Gallerage… that is the Helyx. Thanks for reading. 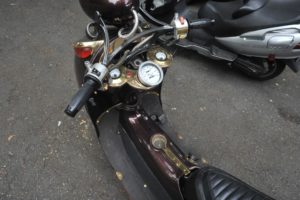 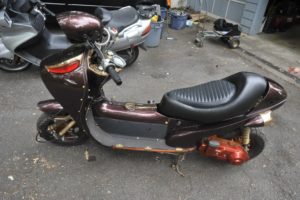 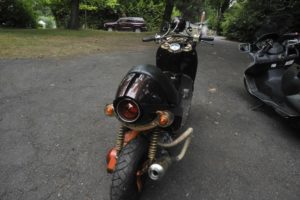 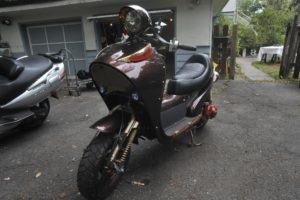