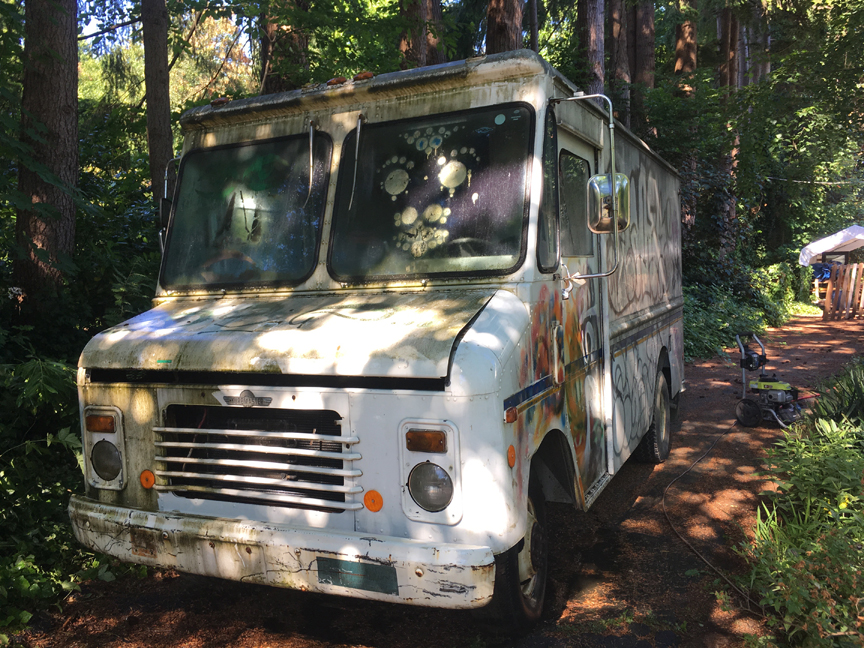 GOOGLED IT!
Watching drivers jump in and out of a step van… without opening or closing the door, made these vans the coolest vans, for me.
I hung on to that love for almost 60 years, until Ol’Son got towed into my life.

I came upon a CL ad, for a ’96 step van for $800. That got my attention, but hidden in the back of the photo, was another van… a 1985 Grumman Olson Step van, the very model which I had lusted after. 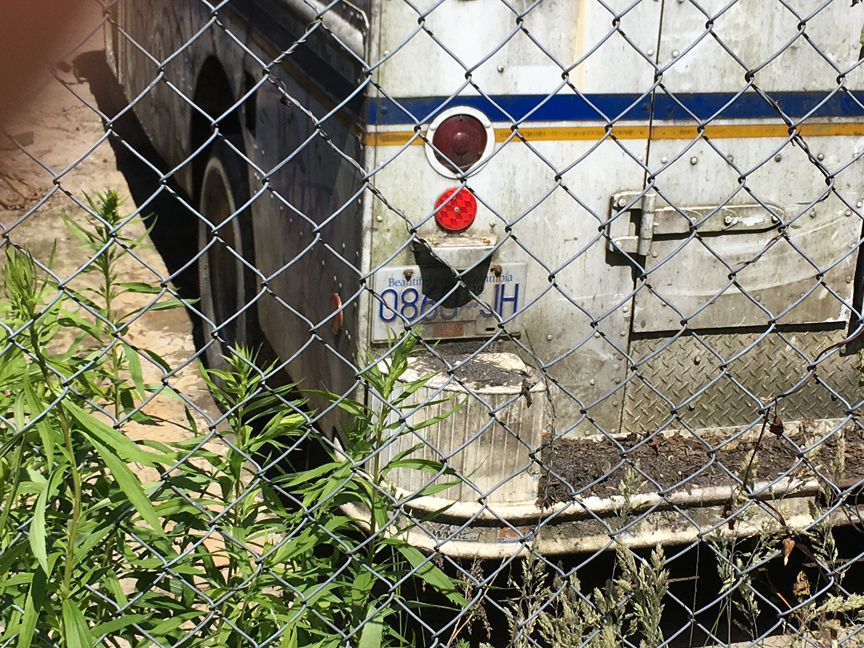 I contacted the seller and asked about the one in the background, was it for sale. It was, and the price was the same… $800!
It is likely that the only thing that saved Ol’Son from a rusty demise, was the fact that it was covered in dust, and graffiti, sequestered to the back of a dry gravel yard for more than a decade.
I purchased it on the spot and then for 1/2 the purchase price… I had it towed over to the Gallerage.

WAS ALL THAT IN THERE?
Now… I was pretty sure that all that crap that was in the back… wasn’t there when I looked at it. Possibly it was those rose coloured glasses I wore that day, but I managed to gloss over the fact that there was a van full of discarded wood, mechanical parts, boxes and boxes of discarded neon lights… all thrown into a heap in the back.

First order of business, pressure wash the outside and remove the grime, so I could get a quick paint on it to cover up the graffiti. I chose to use a marine paint, as it was thicker, and rolled on two coats covering the graffiti sufficiently enough to hide it from the neighbour’s point of view.

Then came the interior… what a mess!
It was like digging out a hoarders shed, full of rotten cardboard, wood and boxes of used neon lighting. But the biggest mess to remove had been hidden to me. 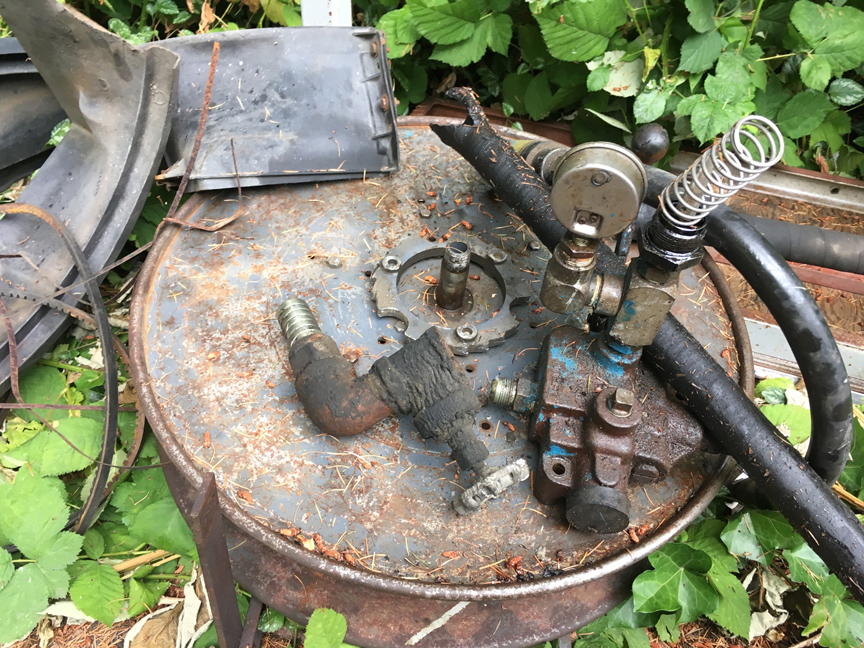 Underneath all of the junk, I soon discovered the purpose of the vehicle. A large hose reel in the corner, which rolled out 50 ft of two heavy duty pressure hoses, a metal storage tank half full of fluid, and two large thick heavy hoses running under the van that ran front to back, to a filtered radiator and back to the reels.
I was in for a mess of trouble and hurt with these beasties.

WHAT WAS IT USED FOR?
The original use of the van was, as best I can deduce, a hydraulic pump truck for big jack hammers?
I did see a similar reel setup on a BC Hydro truck, with the reels running down into the sewer, so I can’t say for sure. But they were heavy messy and incredibly difficult to remove.
The deconstruction of the interior and the removal of those components took weeks… that ran into months. But eventually the interior was free and clear of previous clutter and then, that too, got a good pressure wash… twice!

BIG PLANS!
Ol’Son arrived at the Gallerage at the end of May 2018, with my vision of it becoming a mobile art studio. The eventual goal… to travel across Canada and record images and events for future paintings.

Even though the original motor in van, had only 150,000 km on it, I quickly realized that, I wasn’t going to get this running, by simply adding gas and a battery.
It was going to take a new engine to satisfy my future needs for this van.
I had budgeted $10,000 to have the van up and driving, so I was pretty confident that anything that could go wrong, would be covered by that amount…
I underestimated by @ $4,000, but to be fair, $14,000 did get me a completed van, except for tires and paint.
The list of parts I needed made counter people at the auto parts store… quiver with anticipation.
So far I have replaced or repaired everything on or under the van… except the exhaust system, and that is on the list for next year.

FIRST WILD RIDE!
I moved Ol’Son over to the new Gallerage location in Campbell River at the end of 2018 and closed the chapter on Deer Lake with a sense of adventure for the things to come.
Ol’Son was drivable… just.
I had it loaded to the ceiling, with things which I needed moved over to the island… and I had yet to do a full road test.
The trip that morning to catch the ferry was its first “shake or break tour”.

That morning, was one of the windiest trips to, and across, on the ferry that I have encountered in years. Ol’Son handled like a brick with a mainsail attached to it.
I counted off the kms until I arrived at the ferry terminal.
That was the first step, the second step was getting it off the ferry, and so it went all the way up the island.
The heater worked, the lights worked, the wipers worked… that’s all I needed to get me there.
I had no idea how much gas I needed, since the speedo and the rest of the dash gauges didn’t work.
We arrived in CR later that night, exhausted and shaken but not stirred.

INTERIOR BUILD!
I have to take a moment here, to thank my dad… for all of the hours and unrewarded effort he has put into this project with me.
Without his help, I would not have been able to complete the RV wiring, plumbing and gas lines.
His lifetime knowledge of campers and trailers was a godsend to me… Thanks pops… truly appreciated!

Once the framing was completed and all the under counter and behind the scenes items were completed, it was time to start panelling it in.
I chose to use a 3/8 plywood as backing and finished off with a “doorskin” mahogany ribbon plywood “1/8 thick. I ran the ribbon pattern horizontally, to create the illusion of a wider space and it definitely gives off an old boat vibe.

Corners were all cut from salvaged cedar from a Kitsilano sauna, which is another story, and I had lots of it so it was a huge savings to me in the long run. All finished with a teak oil and hand rubbed for a beautiful soft finish.
The interior is functional, with a built in wet/bath, 3 way fridge, hot water, propane heat and a unique sound system. I could have gone with an in dash car stereo system, but I chose instead to utilize an old iBook G4, loaded with over 5900 songs in iTunes with an additional 4000 songs on added to an external HD.

The speakers were Altec Lansing computer speakers which I had kicking around. I deconstructed the powered unit and separated the wiring and additional speaker plug ins to create a powered base station, hidden behind the dash panel of the van. The speakers and computer are powered by a 1500 watt inverter which works perfectly, powering the 16 speakers I have built in throughout the van.
The sound is focussed on the driver, but once you are in the back, you get the second half of the auditorium experience.

ARV!
Ol’Son is an ARV… an Art Research Vehicle. It has a functioning art desk which I had intended to be a portable art centre. I have found this to be handy, but not fully functional as I find myself outside more often painting than I do inside. So this area is essentially a staging prep area – a place to throw stuff.